GTN producers bring more than 50 combined years of video production experience.  The staff's attention to detail and quality video, audio and post production is backed up by more than 30 national awards. 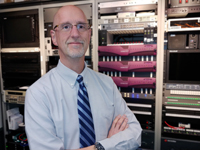 David Brown has been working with Greensboro Television Network more than 20 years.  Originally hired as a producer, he’s now the Station Manager, managing a staff of three producers.  He enjoys working with each City department, learning how the City operates and giving residents a window into city government.  Prior to working at GTN, he served as a producer with an independent production company in New York, producing corporate and broadcast videos. 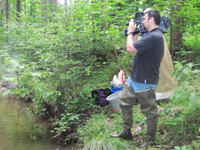 Carlos Castellanos has been with Greensboro Television Network more than 10 years, beginning as an Intern, and currently working as a Producer.  Carlos is a graduate from UNCG’s Media Studies Department with a concentration in Film and Video.  Carlos has produced several award-winning videos for GTN and currently produces long running shows, such as “FYI Weekly” and “This is Greensboro.”  Carlos enjoys working for and living in the City of Greensboro with his wife and two children. 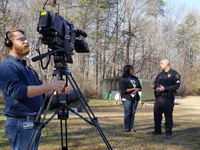 Josh Johnson has been a producer with GTN for five years.  Josh is a  graduate of the UNCG Broadcasting Program.  He spent a year working in Wilmington for ScreenGems Studios and WECT News.  Most of his experience was with Time Warner Cable in Durham, covering Raleigh, Durham and Chapel Hill, producing content for its Local Access / Leased Access Channel, Carolina 24.  Josh really likes collaborating with all the different people, departments and projects at the City.  He enjoys being a part of telling the City’s story. 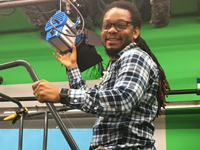 Devon Smith is a graduate of North Carolina A&T State University. He has worked for Greensboro Television Network for three years; and is the newest member on the GTN Staff.  This is the first job Devon obtained after completing his bachelor’s degree.  He enjoys connecting with Greensboro Residents through video production. Also, learning about different City departments and working with them to produce quality projects for GTN.

In addition to having talented producers, GTN is fortunate to have dedicated on-air talent who bring energy and enthusiasm to each production. 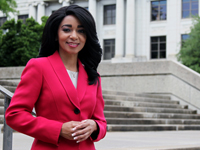 Carla Banks serves as the Communications & Marketing Director for the City of Greensboro.  She is the creator and host of FYI Weekly, the City’s flagship newscast. Carla also hosts Greensboro Business Profiles and Behind the Badge.  Viewers are invited to visit various locations in Greensboro and hear from the City Council members, when Carla hosts Council Connections.  Often times, Carla lends her vocal talents to special projects, such as the Made in Greensboro series. 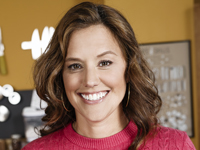 Rosemary Plybon always loved to tell stories. In kindergarten she dreamed of becoming a news reporter, and eventually found herself reporting and anchoring on local television first in Savannah, then Wilmington and finally home in Greensboro. After taking some time off to be a full-time mom of four, Rosemary joined the GTN team and loves sharing all the good things happening in Greensboro in This is Greensboro. 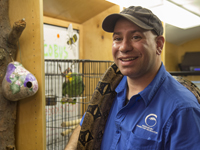 Michael Romano was born and reared in New York City, but now calls North Carolina home.  He loves the outdoors and everything that lives in it.  After a number of years working as a trainer and keeper in different zoos, he found his true calling as an educator and likes to bring both worlds together with EcoVenture GSO – using animals and plants to spark interest and learning in everyone around him.