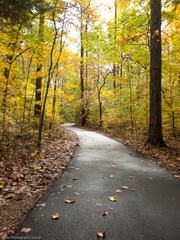 The Bicentennial Greenway, a collaborative effort between Guilford County and the City of Greensboro brings a regional trail to the Triad. Approximately eight miles of the northern section of the trail is maintained by the City's Parks and Recreation Department.

The trail has gone through several stages of development since its inception in 1989. Approximately seven miles of the Bicentennial Trail are completed in the High Point area (from Piedmont Environmental Center to Highway 68). Only 3.5 more miles of trail need to be completed before the two trail segments converge, providing an almost 20 mile greenway that connects the City of High Point to the City of Greensboro.

How do I get there?

The Bicentennial Greenway can be accessed just north of the Guilford Courthouse National Military Park parking lot on Old Battleground Road. The Bicentennial Greenway travels northwest along Old Battleground Road and then changes direction southwest through wooded open space. Cross Battleground Avenue and take the sidewalk along Drawbridge Parkway to Kernodle Middle School. Follow the trail signs across the road into the woods to its current terminus near Horse Pen Creek Road. The new sections can be accessed from Guilford Elementary School and the Leonard Recreation Center.

From the intersection of the Bicentennial Greenway and Lake Brandt Road in Greensboro, you can connect to the A&Y Greenway leading out to Bur Mil Park. The Nat Green Trail and Palmetto Trail are also accessible from the greenway (see map below for details). Guilford Courthouse National Military Park trails are accessible from the Bicentennial Greenway with parking available on Old Battleground Road.