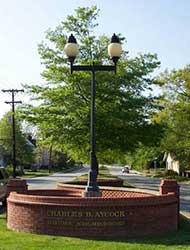 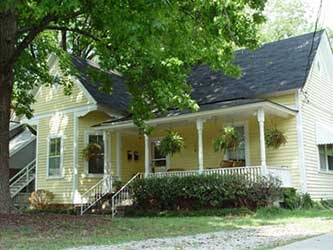 Review the neighborhood's tree inventory report and
check out the interactive GIS map that illustrates the findings.

The Historic Dunleath neighborhood (formerly Aycock) is located less than a mile northeast of downtown Greensboro along Summit Avenue. The area holds two levels of historic district designation, both as a National Register Historic District designated in 1993 and a Locally Zoned Historic District designated in 1984. Historically, the area was home to many of Greensboro’s middle and upper class residents and this can be seen through the variety of residential architecture in the area. The majority of the neighborhood was developed in the late 19th and early 20th century and is named for the public middle school located along Cypress Street within the neighborhood. The Dunleath neighborhood is also home to the World War Memorial Stadium, one of the nation’s oldest surviving minor league stadiums, and the Greensboro Farmer’s Market.

Designation as a locally zoned historic district has provided for the area, under State Legislation, to become a "Municipal Service District (MSD)." Property within a Municipal Service District is taxed at a slightly higher rate than in the rest of the city for the purpose of enhancing the special character of the historic district. This property tax is set aside and placed in a fund managed by the City of Greensboro for use on projects in the public right-of-way and for the benefit of the neighborhood. The installation of decorative historic street lighting and the restoration and landscaping of the Hendrix Street pedestrian bridge are examples of how this additional tax has been used to improve the neighborhood. 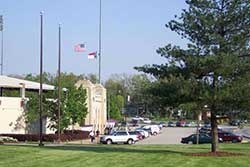 Since the adoption of the Strategic Plan for the Dunleath Neighborhood, efforts have been underway to implement several of the priority actions. The Summit Avenue Corridor Plan was adopted by the Greensboro City Council on September 19, 2006. The plan assessed land use, market conditions and infrastructure needs for the section of Summit Avenue between Murrow Boulevard and Bessemer Avenue, and the area on Yanceyville Street that includes the Farmer’s Market and War Memorial Stadium. Improvements to the Summit Avenue Corridor were included in the 2008 transportation bond package.

Through a partnership with Guilford County Schools a decorative fence was constructed to replace a chain link fence along two neighborhood gateway points at Bessemer Avenue and Yanceyville Street.  On-going landscaping of public right-of-ways and neighborhood identification also helps to enhance gateway entrances to the neighborhood for both pedestrian and vehicular traffic. Street sign toppers were introduced at several intersections to help identify the neighborhood. The neighborhood association also participated in a design process for a vacant tract of land within the neighborhood known as the Dunleath Site to explore development concepts with the property owner. This design process has resulted in the current use of the site as a Community Garden stemming from the concept of an urban agricultural use.