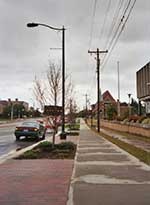 From the turn of the century to the late 1950s, the East Market Street Corridor flourished. It was the shopping and social center for many of Greensboro's African Americans, who owned businesses on the street and provided services to those shut out by segregation practices in other Greensboro neighborhoods.

This lively community began to wind down in the late 1950s and 1960s when, under the guise of "urban renewal," thousands of people and more than 80 businesses (many minority-owned) were displaced. Most of those businesses never reestablished.

Decline and disinvestment took a toll on the neighborhood -- and its residents. When the City designated the East Market Street Corridor for revitalization in 1998, it had to win the trust of residents. The City worked to involve as many residents as possible in the planning process to give people a voice and a role in their neighborhood's future. The City authorized the East Market Street Development Corporation (EMSDC) to serve as "lead agent" in implementing improvement ideas in the neighborhood.

Revitalization has begun on East Market Street, with streetscape improvements focusing on pedestrian safety and aesthetic quality seeing completion in 2005. The goal is to once again make this neighborhood a center of economic vitality and create a sense of cohesion, through community festivals, merchants' associations, and neighborhood groups.