Since the City began work in 1990 to revitalize the Gorrell Street neighborhood, there have been many instances of effective interdepartmental team efforts and partnering with residents, Bennett College, Gate City CDC, and other public and private agencies to achieve community objectives. All activities funded in the Gorrell Street area demonstrate the City’s commitment to funding equity in Southeast Greensboro, as well as effective infill development and reaching the goal of creating a safe living environment.

To address residents' concerns of excessive loitering and crime near a small commercial area, most of this small neighborhood has been rezoned for single family residential use. Revitalization efforts focused on relocating businesses and supporting nonprofit housing providers. Further relief came when the Weaver House Urban Ministry Center was developed west of the neighborhood (through partial funding from the Community Development Program), and the food service operation at PATHWAYS was moved to the Weaver House. 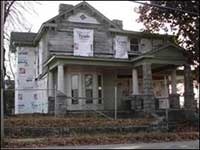 The neighborhood is also home to the Magnolia House Motel. Currently undergoing restoration, it is one of the few remaining activities in revitalization work planned for the Gorrell Street area. The Magnolia House Motel is special not only because of its 4,000 square feet of Italiante-Queen Anne architecture, but also for its amazing history.

During America’s period of segregation, the Magnolia House Motel accommodated traveling African Americans who were barred from using the eating and sleeping facilities used by white people. In the 1950s and '60s, many prominent African Americans stayed at this home, including Ray Charles, Ruth Brown, Ike and Tina Turner, Joe Tex, Satchel Paige, and Jackie Robinson. In addition to housing celebrities, the Magnolia House accommodated the families of students attending the historically black schools of Bennett College and North Carolina A&T State University. It also served the community as a place for wedding receptions and other formal gatherings. The Magnolia House Motel (known by its formal name, the Daniel D. Debutts House) is on the National Register of Historic Places and is in the South Greensborough National Register Historic District.