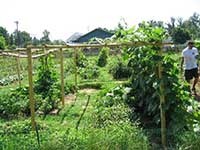 Once the site of an old rock quarry, the Phillips / Lombardy neighborhood has replaced the sounds of mining with the sounds of children playing. Deteriorated commercial structures have been removed and the quarry site cleaned. Now the neighborhood is made up of a day care center, new single family homes, and local businesses.

In 2003 and 2004, Project Greenleaf (a University of North Carolina at Greensboro program) used a vacant site in the Phillips / Lombardy neighborhood for an immigrant community farming program. The site is now slated for the development of an urban farm by a local non-profit.