At the turn of the century, the Southside neighborhood was one of Greensboro's premier neighborhoods with its large homes along Gorrell, Murray, and McAdoo streets, as well as Asheboro Street (now renamed Martin Luther King Jr. Drive). Over the years, the area has suffered, as once owner-occupied homes were split into poorly maintained rental units and its character diversified with warehousing and light industrial uses.

In 1996, the Greensboro City Council approved a bond package that included funding for the redevelopment of a blighted neighborhood on the southern edge of the downtown. An intensive community planning process followed.

The result was the Southside Plan -- an innovative blueprint that breaks ranks with previous redevelopment plans in Greensboro. The Southside Plan follows the principles of "new urbanism." Existing historic houses are being renovated for owner-occupied residences. 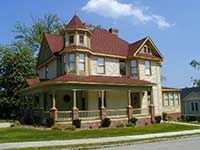 New housing will feature houses that are closely spaced and oriented toward the street with wide front porches. Sidewalks, period street lights, and other amenities add to the turn-of-the century ambiance.