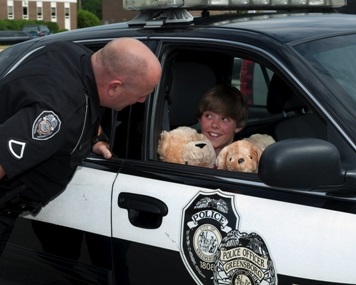 The gift of a small stuffed teddy bear can make a big difference in the life of a child who has experienced trauma. That’s the concept behind the Officer Ted E. Bear Program.

Officers from the Greensboro Police Department (GPD) carry a few bears with them and offer them to children at crime scenes, accidents, domestic violence calls, child abuse/neglect calls and other incidents.

The bears are a great comfort to small victims/sufferers, and serve as allies for officers. They instill trust in uncomfortable or unfamiliar surroundings.

Launched in May 1989, the program is sustained through the generous donations of new stuffed teddy bears from members of the public, service groups, and businesses. Officers and advocates with the Child Response Initiative hand out more than 600 bears every year to children.

Although the Officer Ted E. Bear Program is designed for children victims, the plush toys may also be given to others who could benefit from a smile or hug.

If you are interested in donating new bears to the Officer Ted E. Bear Program, call GPD's Office of Community Engagement at 336-373-2636.