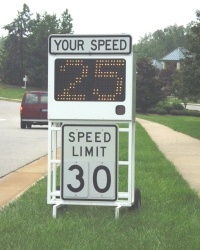 The Neighborhood Speed Watch Program lets you take an active role in helping to change driver behavior in your neighborhood.

The Greensboro Department of Transportation (GDOT) will loan a radar display unit to you so you can monitor speeds along your street. The unit displays the speed limit for the street and the travel speed of passing cars. You record the speeds as drivers go by, giving you an idea just how fast they are traveling.

Often, drivers are unaware of their speed or of the impact their speed has on the residents they are passing. This type of real-time awareness encourages speeding motorists to slow down. Passing motorists are left with the message that residents will not tolerate speeding in your neighborhood.

Why Should I Get Involved?

Stay out of the street.
Conduct the study from behind the street curb and wear the provided safety vest. Have your vehicle parked away from the study area on a side street or in a private driveway.

Obey all traffic and pedestrian laws. Be courteous and exercise reasonable care.
Do not argue with motorists who may stop or with other pedestrians. Instead, hand them a Speed Watch brochure and ask them to call the telephone number on the brochure if they have questions or objections to the program. Do not make gestures or verbal comments toward passing vehicles. Do not throw objects at vehicles or drivers. If confronted physically, your duty is to retreat. Do not fight.

Use common sense.
Do not chase, attempt to stop, or apprehend drivers.

Do not encourage non-participants to be present.
Only the person who has completed the participant commitment form and signed the application may participate in the speed watch study. A crowd of people on the sidewalk will only draw attention and be counter-productive to the project.

Accurately represent the Speed Watch Program.
The public may incorrectly assume that you are a representative of the City or a law enforcement officer, or that your actions will result in them receiving a traffic citation. You must make it clear that you are acting as a private resident within the context of a City-authorized program.

Download this application for the Neighborhood Speed Watch Program.