Every December 1, Greensboro Transit Authority GTA) recognizes the life of Rosa Parks, not only for what she has done for public transportation, but for the United States in the area of civil rights. She was born as Rosa Louise McCauley on February 4, 1913 in Tuskegee, Alabama. However, she later moved to Pine Level, just outside of Montgomery, until she married Raymond Parks and moved within the city limits of Montgomery. Growing up, Parks had seen her share of discriminatory practices as she along with other African-American children walked to their dilapidated schoolhouses while whites passed by on buses to their fully equipped schools. Although destined for a future within the civil rights movement, Parks first had to suffer through a life under segregation. Vandalism, arson, and even physical abuse were the norm from people who did not agree that the races were equal. But, that would change.

In Montgomery, the first four rows of bus seats were reserved for white people. Buses had "colored" sections, generally in the rear of the bus, for black people who made up more than 75 percent of the bus system's riders. These sections were not fixed in size, but were determined by the placement of a movable sign. Black people also could sit in the middle rows until the white section was full. Then, they had to move to seats in the rear, stand, or, if there was no room, leave the bus. Black people were not allowed to sit across the aisle from white people. The driver also could move the "colored" section sign or remove it altogether. If white people were already sitting in the front, black people could board to pay the fare, but then had to disembark and reenter through the rear door. There were times when the bus departed before the black customers who had paid made it to the back entrance.

For years, the black community had complained that the situation was unfair, and Parks was no exception. She had her first run-in on the public bus on a rainy day in 1943, when the bus driver, James Blake, demanded she get off the bus and reenter through the back door. As Parks began to exit by the front door, she dropped her purse. She sat down for a moment in a seat for white passengers to pick it up for her. The bus driver was enraged and barely let her step off the bus before speeding off. Parks walked more than five miles home in the rain.

After a day at work at Montgomery Fair department store as a seamstress, Parks boarded the Cleveland Avenue bus at around 6 pm on December 1, 1955, in downtown Montgomery. She paid her fare and sat in an empty seat in the first row of back seats reserved for blacks in the "colored" section, which was near the middle of the bus and directly behind the 10 seats reserved for white passengers. Initially, Parks had not noticed that the bus driver was the same man, James Blake, who had left her in the rain in 1943. As the bus traveled along its regular route, all of the white-only seats in the bus filled up. The bus reached the third stop in front of the Empire Theater, and several white passengers boarded. 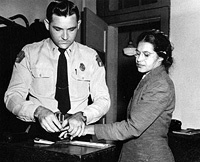 Following standard practice on that day in 1955, bus driver Blake noted that the front of the bus was filled with white passengers and there were two or three men standing. So, he moved the "colored" section sign behind Parks and demanded that four black people give up their seats in the middle section so that the white passengers could sit. Three of them complied, but Parks did not. The black man sitting next to her gave up his seat and Parks moved into window seat to allow another passenger to sit on the aisle. The bus driver then said, "Why don't you stand up?" Parks responded, "I don't think I should have to stand up."

Blake called the police to arrest Parks. She was charged with a violation of Chapter 6, Section 11 segregation law of the Montgomery City code, even though she technically had not taken up a white-only seat - she had been in a colored section. Four days later, Parks was tried on charges of disorderly conduct and violating a local ordinance. The trial lasted 30 minutes. Parks was found guilty and fined $10, plus $4 in court costs. 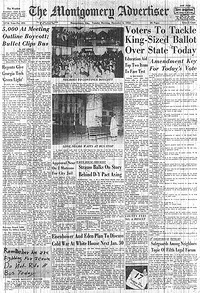 On Sunday, December 4, 1955, plans for the Montgomery Bus Boycott were announced at black churches in the area and a front-page article in The Montgomery Advertiser helped spread the word. At a church rally that night, those attending agreed unanimously to continue the boycott until they were treated with the level of courtesy they expected, until black drivers were hired, and until seating in the middle of the bus was handled on a first-come basis. The day of Parks' trial - Monday, December 5, 1955 - 35,000 leaflets were distributed. The handbill read, "We are...asking every Negro to stay off the buses Monday in protest of the arrest and trial...You can afford to stay out of school for one day. If you work, take a cab, or walk. But please, children and grown-ups, don't ride the bus at all on Monday. Please stay off the buses Monday."

It rained that Monday, but the black community persevered in their boycott. Some rode in carpools, while others traveled in black-operated cabs that agreed to charge the same fare as the bus, 10 cents. Most of the remainder of the 40,000 black commuters walked, some as far as 20 miles. In the end, the boycott lasted for 381 days. Dozens of public buses stood idle for months, severely damaging the bus transit company's finances, until the law requiring segregation on public buses was lifted. Parks, along with the black citizens of Montgomery, had made the difference.

After her arrest, Parks became an icon of the Civil Rights Movement but suffered hardships as a result. She lost her job at the department store, and her husband quit his job after his boss forbade him from talking about his wife or the legal case. Parks traveled and spoke extensively. In 1957, Raymond and Rosa Parks left Montgomery for Hampton, Virginia, mostly because she was unable to find work. In Hampton, she found a job as a hostess in an inn at black Hampton Institute. Later that year, after the urging of her brother and sister-in-law, Rosa, Raymond, and her mother Leona McCauley, moved to Detroit, Michigan.

Parks worked as a seamstress until 1965 when African-American US Representative John Conyers hired her as a secretary and receptionist for his congressional office in Detroit. She held this position until she retired in 1988. Parks eventually received many honors ranging from the 1979 Spingarn Medal to the Congressional Gold Medal, a posthumous statue in the US capitol's National Statuary Hall. Her death in 2005 was a major news story; she was granted the posthumous honor of lying in honor at the Capitol Rotunda, the first African-American woman to do so.

The end of segregation on public transit was an important step for human relations throughout the country, including Greensboro. The City also operated segregated transportation systems on the bus system as well as the railroads. In 1920, Charlotte Hawkins Brown, founder of the Palmer Institute, found herself surrounded by 12 white males as she took a train from Greensboro to Memphis, Tennessee. They forcibly removed her from the train car stating “Negroes can’t ride in coaches with white people.” This would not be her first time being pressured under these types of attitudes, and as a result, she successfully sued the Pullman Car Company and won, albeit only a few dollars. Brown waited for her train that day in Greensboro in the colored waiting area of the Southern Railway depot, which like many colored facilities in the day was not equal to areas designated for whites. When the Greensboro depot facility was renovated in 2005, construction workers found the original colored waiting area sign under the façade that once marked the separation of races in the train station. It was carefully removed and donated to the International Civil Rights Center and Museum in downtown Greensboro when it opened in 2010. 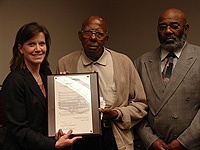 In 1938, public transportation provider Duke Transit promoted the City’s first African-American bus driver. Ed Greenlee was formerly a mechanic with the company who accepted the opportunity to break the color barrier behind the wheel. Greensboro recently recognized his efforts with a special commendation for opening the doors for many others in transportation.

Then and now, the City's transportation goal is to serve the Greensboro community with the best transit services possible, regardless of race or any other federal protected class. We all owe a great debt to people like Parks who by sitting in her seat, made a stand for all people.