Learn about Watch for Me NC events and resources for
Greensboro and the University of North Carolina at Greensboro.

The City of Greensboro and UNC-Greensboro are partnering with the North Carolina Department of Transportation (NCDOT) to run the Watch For Me NC campaign, which focuses on bicycle and pedestrian safety. The purpose of the campaign is educate motorists, bicyclists, and pedestrians on staying safe on public roadways and raise awareness of traffic safety amongst these groups, as well as educating law enforcement officers to better understand and enforce traffic safety laws related to bicyclists and pedestrians.

The main part of this campaign runs during the fall, but traffic safety outreach using Watch For Me NC materials and messages takes place during the entire year, including during Bike Month.

~ For more information about the Watch for Me NC campaign, visit this website.

~ For more information about the local Watch for Me NC campaign, please contact GDOT Planning Division staff at 336-373-4368 or by e-mail. 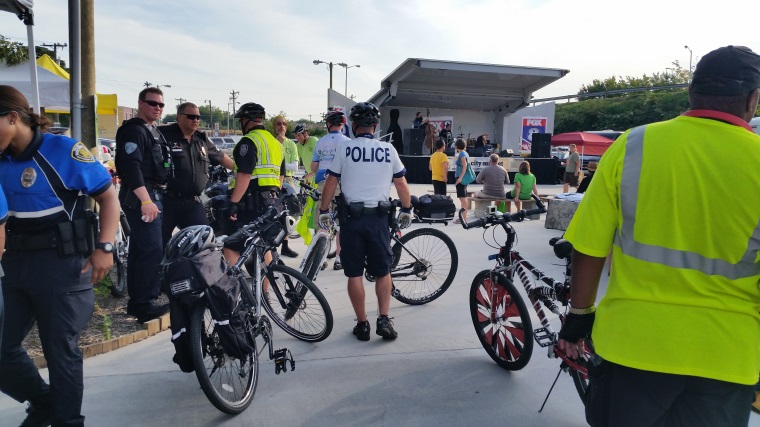 Watch for Me NC is a bicycle and pedestrian safety campaign developed by NCDOT and UNC's Highway Safety Research Center and was piloted in the Triangle region in 2012 and 2013.

NCDOT expanded the campaign into a statewide program in 2014 and requested applications for participation from municipalities and universities around the state. Communities statewide partnered with NCDOT in the campaign's inaugural year, including the City of Greensboro, A&T, and UNCG.

The Watch for Me NC program involves two key strategies:

The goals of the campaign, which targets drivers, pedestrians, and bicyclists, are:

Why a Pedestrian and Bicycle Safety Campaign?

In NC, 2,400 pedestrians and 960 bicyclists are injured or killed in accidents with motor vehicles every year. Although NC is the tenth most populous state in the country, it is seventh in the number of pedestrian deaths. About 90 percent of NC residents agree that having a safe pedestrian network contributes to their well being and quality of life.

From 2007-11 in the Greensboro Urban Area MPO, there were 217 bicycle crashes and with one fatality, and 660 pedestrian crashes with 20 pedestrian fatalities. A majority of these crashes, whether bicycle or pedestrian, occurred near Greensboro Transit Authority bus stops. As more residents turn to alternative forms of transportation such as walking, biking, and transit, becomes more important to address the safety concerns of these roadway users to reduce crashes.