The NC Department of Transportation (NCDOT) has identified significant deficiencies in the five stream segments flowing through Starmount Forest Country Club. NCDOT identified the need for improved water quality in a system that flows through a golf course with numerous stormwater inputs, as well as inconsistencies in the pattern, dimension, and profile when compared to similar stable reaches.

Severe bank erosion and sloughing were caused by insufficient bank vegetation, flashy urban drainage, channel alterations, and inappropriate maintenance practices. There were also aggravations of the channel bed due to over-widening and corresponding loss of aquatic habitat. The construction was completed in 2000.

Based on an evaluation and assessment of the stream, the following goals were implemented: 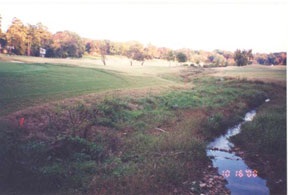