Pre-treatment of raw water for Mitchell Water Plant is done at Lake Brandt with the application of Liquid Sodium Permanganate. This treatment helps to remove Manganese, Iron and some organics from raw water before coming to Mitchell Plant for treatment.

At Townsend Plant, pre-treatment is done with the introduction of little hypochlorite inside the raw water pipe before it goes to flash mix. Sodium Permanganate cannot be used because of low contact time.

In the Coagulation and Flocculation process, very fine suspended particles are caused to come together to form larger particles that can be settled and filtered out of water. These include fine slits, bacteria, color causing particles and viruses that might not settle for days, months or even years. Although individual particles cannot be seen with the naked eye, their combined effect is often seen as cloudiness or turbidity in the water. These particles are small enough to pass through later in the treatment process if not properly coagulated and flocculated. These could adversely affect not only the clarity of water, but its taste and odor as well as the effectiveness of chlorine disinfection.

During Coagulation, the chemical Ferric Sulfate is added to the incoming raw water in the flash mix. The water is stirred vigorously in the flash mixer to assure quick, uniform dispersion of the ferric sulfate. Ferric reacts rapidly with compounds in the water that contains carbonates, bicarbonates and hydroxides to produce a jelly-like substance that absorbs impurities. At the same time, Ferric, with positive charge, neutralizes the negative charged natural particles and draws them together to form small particles called micro-floc.

Water moves from the flash mixer to the flocculation basins that contain a vertical system of Flocculators. The basins provide a gentle, constant mixing of Micro-flocs formed during coagulation. These stirrings promote the formation of larger and heavier flocs. After 20-30 minutes, the floc particles become visible and will look like tiny tufts of cotton wools, separated by clear water. Following the Floc Chambers, water moves into the Sedimentation basins.

Sedimentation is a process of removal of solids from water by gravity settling. Settling Basins are designed to hold large volumes of water for several hours. The design of settling basins allows the velocity and turbulence of water to be decreased to the point that the water will no longer transport the flocculated solids and they will settle to the bottom of the basins. The solids that settle out are routinely removed through Trac-Vac system.

At the end of settling basins, Hydrated Lime/Caustic is added to the water to increase its Ph. This is necessary for oxidation reaction. After that, chlorine as Sodium Hypochlorite is added for disinfection, to oxidize Iron and Manganese and to prevent aquatic growth on the filters during the filtration process. 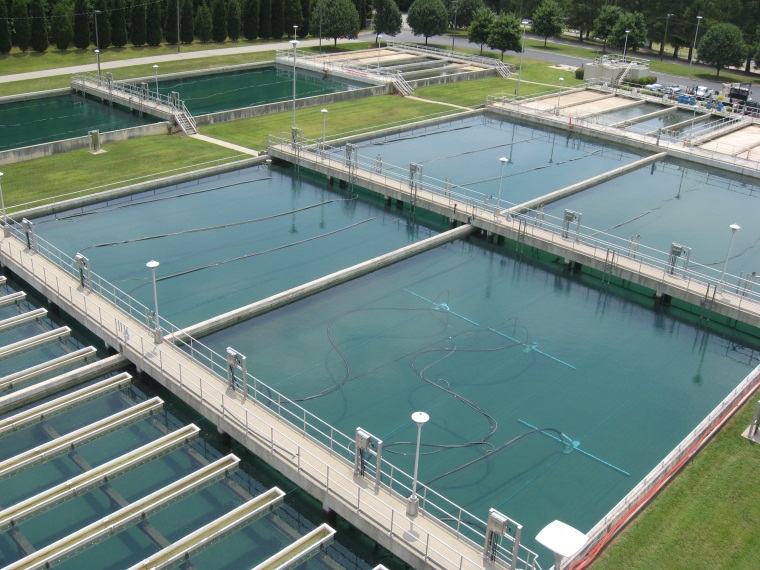 Water flows from the Sedimentation Basins into the filters. Filters contain material of graduated size in layers (called media) that remove solids from the water. The first layer of media is Anthracite (coal), the second layer is sand.

Under the sand there is a layer of stone or plastic composite. At the bottom of the filter there is an underdrain system that supports the media.

Water flows by gravity on to the filters from Sedimentation Basins, leaving behind the suspended particles as water passes downward through the filters. After a period of time, the accumulated solids begin to clog the media. Once the filters are clogged they need to be backwashed. Backwashing is the reversal of the direction of the flow through the filters. A rapid upward flow lifts the particles and keeps them in suspension until they can be washed out.

Following Filtration, water flows into a storage tank called Clearwell. Water leaving the Clearwell is stabilized, Fluoridated, Chlorinated in line and liquid Ammonium Sulfate is added (for chloramination process) in line on the way to the distribution pumps.

Stabilization is a proactive measure that reduces corrosion in water pipes.

Fluoridation is a safe and economical process that is endorsed by public health groups worldwide to reduce tooth decay. Fluoride is added to the line leaving the Clearwell so Fluoride doses can be precisely controlled.

Chlorination is the primary disinfectant used within the treatment process within the plant. Chloraminations is used as the secondary disinfectant throughout the distribution process to keep water safe for drinking without forming any substantial amount of disinfection-bi-product (DBP). A sufficient amount of Sodium Hypochlorite and Liquid Ammonium Sulfate are added to the finished water to form mono-chloramines and a certain ratio is maintained so that a minimum amount (1 PPM) of Mono-Chloramines remains in the water until water reaches the customers' tap.

After the final addition of chloramines, as well as Fluoride and corrosion inhibitors, water is pumped into the pipes that lead to customers through storage tanks. The pumping system includes electric as well as diesel pumps to ensure uninterrupted water supply even during power outages or other distribution challenges.